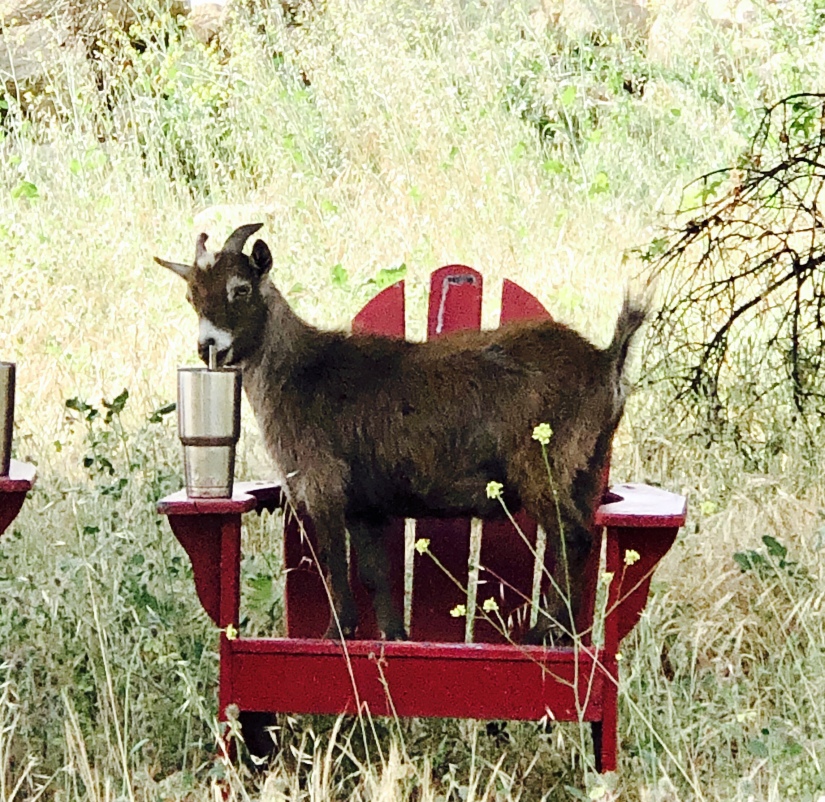 This last month has seen lots of life changes for our family. My dad pasted away on Good Friday. It wasn’t totally unexpected, but still left us all feeling shocked. He was eighty six years old and had heart problems which he had pulled through every other time, but not this time. I guess God was ready for him to go on home.

This is a picture of my mom and dad taken this last August at their sixtieth wedding anniversary. He will be missed.

With the death of my dad, Ron and I felt it was time to be home, closer to our families. We had been talking about it for awhile, but this was the catalyst we needed to pack up from the job in New Mexico and head for home. Now we are trusting God to show us how we can make a living here at home. Stepping out in faith is a scary thing and I’ll have to say that I’m struggling with it… like terrified.

Some options we are kicking around

I’m planning some weekly craft classes that will include pottery, sign painting and paper flowers. Let me know if there are any particular classes you would be interested in. I’m also available to do private group class/parties as well. 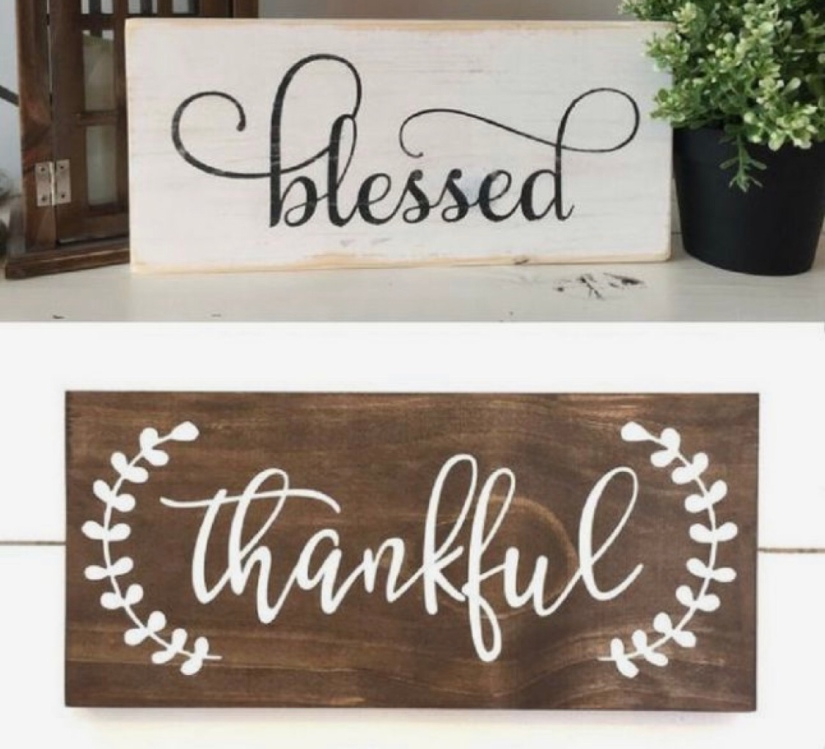 Ron has been busy waging war on boulders

We are trying to make room for another storage container that can hold my pottery supplies and also furniture people want to give us for when we get the house built. Ron has found a couple huge boulders that he can’t move with his tractor, but they are in the way and need to come out. He never gives up and always finds a way to get the job done😊

Here is a time lapsed video of one of the boulder.

I’ll try to be better in keeping you up to date.

I recently was able to go to Waco for Joanna Gaines book launch of her new children’s book ” We are the gardeners”. While I was there I noticed paper flowers everywhere! Not only at Magnolia Market, but also at some of the sweet little shops that have popped up in downtown Waco.

One of the little shops, Linen and Cake, had beautiful silk and paper wisteria hanging from branches. It inspired me to go home and make some paper flowers.

Pictures of the process

I used alcohol ink to dye the coffee filters, then rolled them up into tight little balls to dry…. 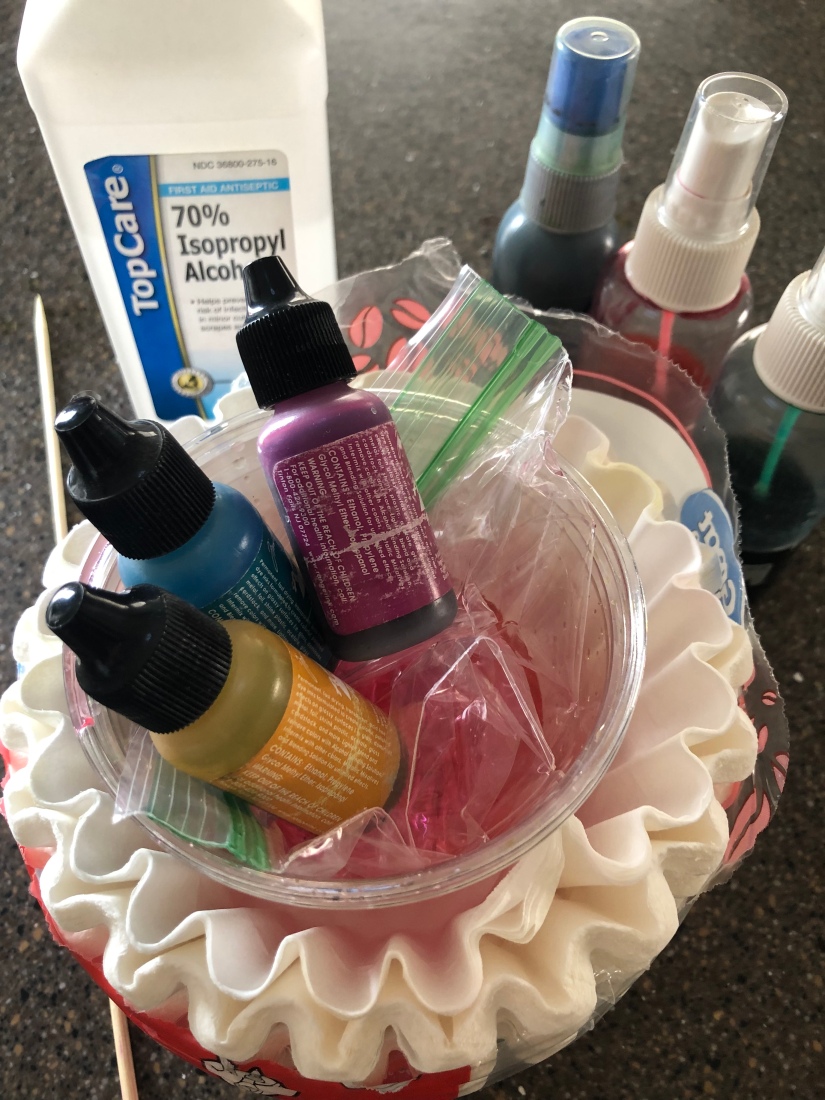 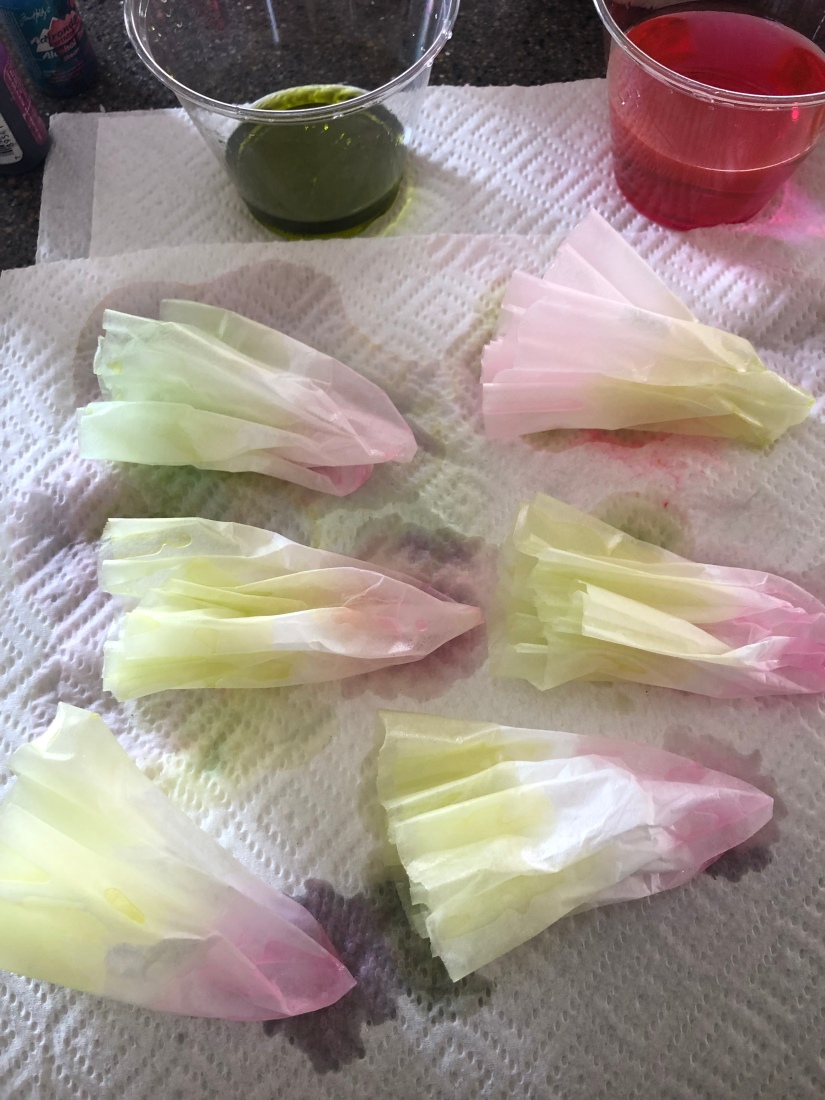 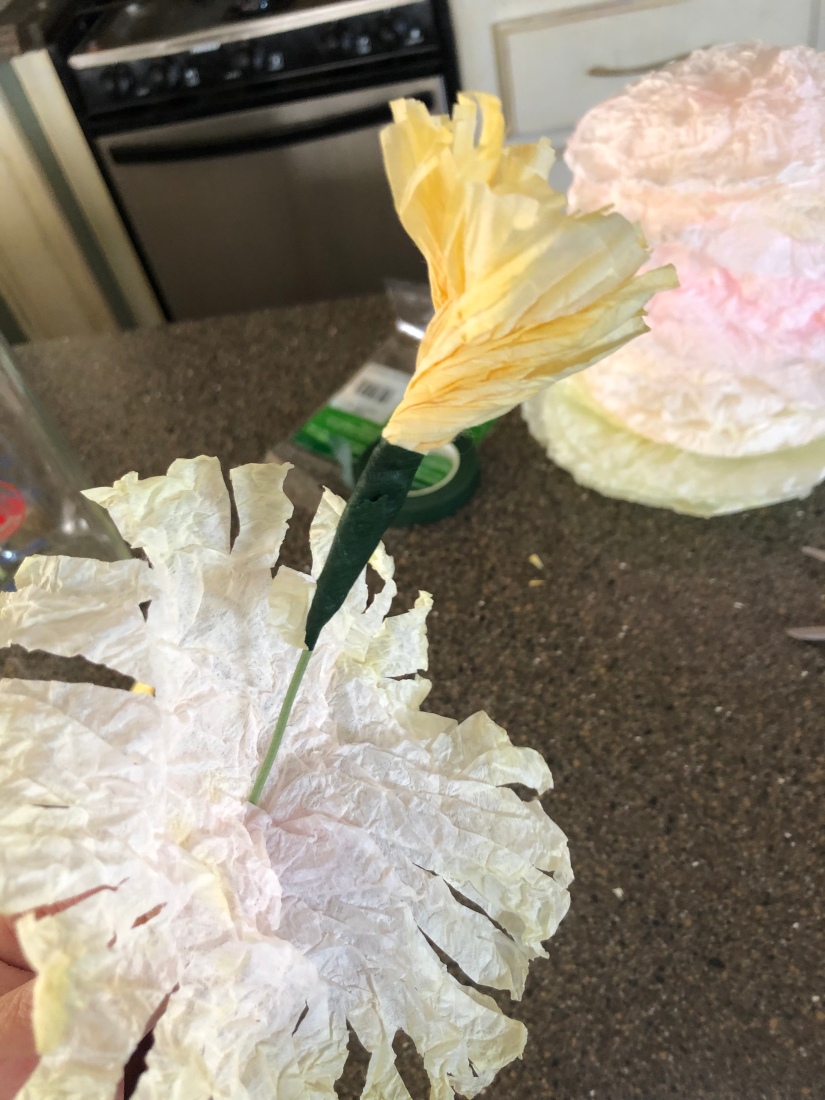 I plan on making some leaves to go with the flowers and then make a garland out of them. I just haven’t gotten that far yet😉

I did want to share what I have done so far. I’ll post some pictures of the finished garland when I get it done.

Next time I’m home I think I’ll offer a paper flower workshop. They are a lot of fun to make.

Springtime on the road

As many of you know, Ron and I are most often on the road for his work. We would love to be home at Stone Creek Farm, but for now we travel from job to job spending nine months or more at each job. So when spring arrives I do what every gardener does, I plant my garden. One nice thing about this job in New Mexico is that spring has arrived already. I watched my weather app for weeks waiting for the night-time lows to rise above freezing and now I am good to start gardening.

Since we travel back and forth all over the United States constantly I make it a point to collect old buckets and resin type flower pots for my garden on the road. I love terra-cotta pots, but it breaks my heart when they are reduced to shards because of all the bouncing on the road. I have even built wooden boxes for my garden in some of the places we have been, but I have to leave those behind when we leave because we don’t have room to take them with us. Although the neighbor I give it to is usually pretty happy. 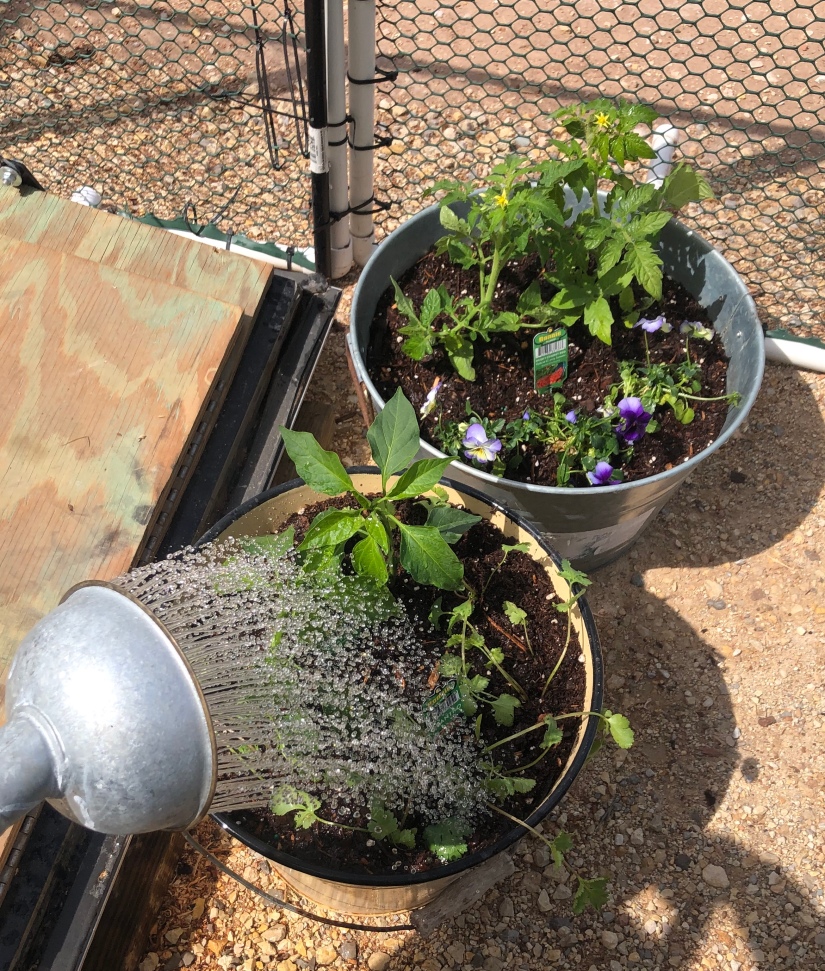 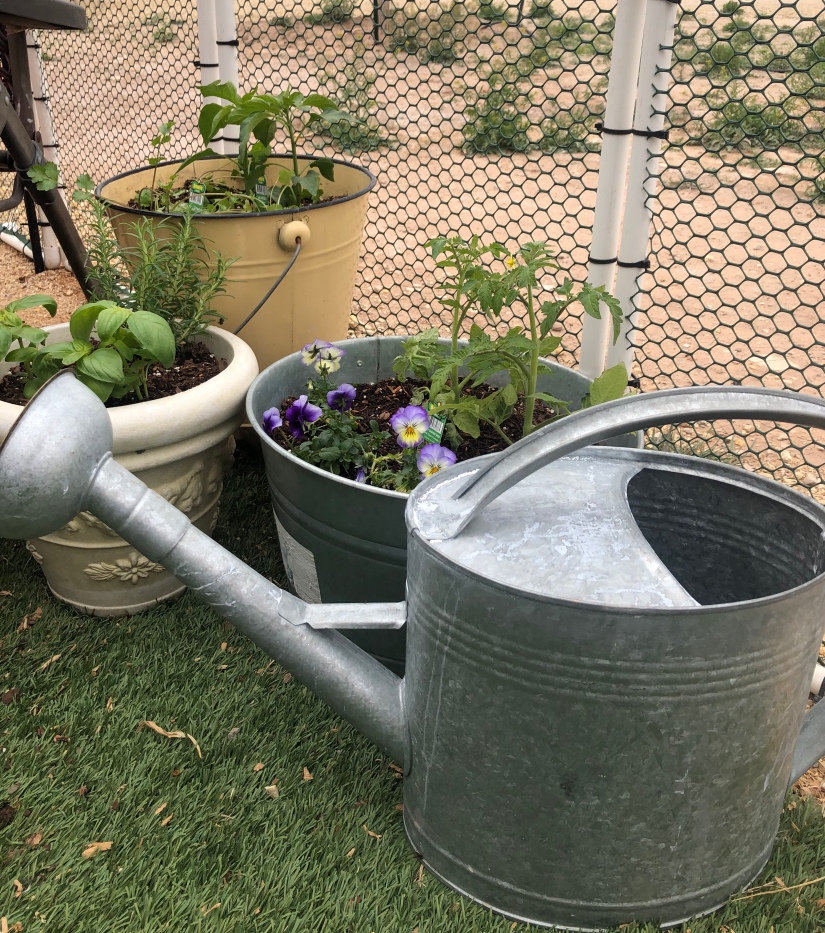 Take it from me… as one who struggles with depression. There is just something in the very act of getting your hands in the dirt and planting a garden that fills you with hope!

I will leave you with Audrey Hepburn’s words

“To plant a garden is to believe in tomorrow.”

Today is the third time I have made yogurt. My first attempt a couple of weeks ago was delicious, but runny. My second attempt, last week was a disaster. I added gelatin as some of the recipes suggested only to end up with gross gelatin lumps that ruined the texture and it was still runny!

I am hopeful that today’s batch will turn out. I used whole milk instead of 2% and added tapioca powder and powdered milk, all the things that I read would make thicker yogurt. I won’t know for another five hours, that’s how long it has to incubate.

What I did today…

Here are the ingredients:

Here are the steps

1. Prep all the ingredients.

I powdered the tapioca in the blender. The tapioca then goes into the pan with the milk to get heated.

I cut open the vanilla bean and scraped out the insides, then mixed it into the 1/2 cup of sugar. I also added the 2 tablespoons of powered milk to the sugar.

Set the container of store bought plain yoghurt out to warm up a bit.

2. Heat the milk and tapioca in a heavy pan. I used my enameled cast iron Dutch oven.

I stirred constantly to bring the milk to 180 – 183 degrees. I also threw in the empty vanilla bean that I had already scraped the insides out of.

3. When the milk reached 180 – 183 degrees I stirred in the sugar mixture and vanilla extract. This is when I removed the vanilla bean pod. I removed the pan from the heat and set it in the sink that I had filled with cool water.

4. I continued stirring until the temperature dropped to 110 degrees then I stirred a cup of the warm milk mixture into the store bought yogurt and dumped it back into the pan stirring the mixture well. 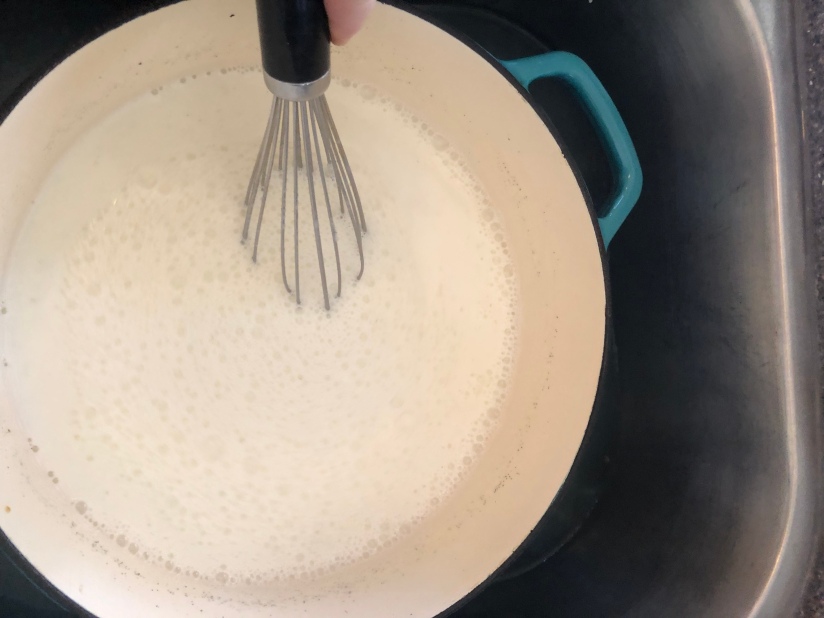 5. I put the lid on the pan and stuck in in my oven with the pilot light lit. I also read that wrapping a towel around the pot and turning your oven light on will keep it warm enough as well, if you don’t have an oven with a pilot light.

Now to wait six hours for the yogurt to incubate. If everything goes right I should end up with some yummy yogurt ❤️

…and the results are in!

It turned out nice and thick, yay!

I’m calling this batch a win, it is thick and tastes great. Adding the powdered milk changed the texture a little, it’s not quite as smooth, but it is far better than having it runny.

I’m back in New Mexico, but my heart is still at the farm.

Today I spent time creating a “vintage postcard” graphic for Stone Creek. I have always loved the way these look, so I decided to try and make one. All in all I’m pretty happy with it. I think I’ll put it on some t-shirts to start with.

While I was home we ended up getting baby bunnies ❤️

Kelsey and Sam get the responsibility of taking care of them… I get to hold them and love them when I’m home, then leave the work to Kelsey. It’s a pretty sweet deal for me!

They are Lion Head bunnies. They will have super long, fluffy manes. Super cute. We are going to try raising them to see if we can make them pay for themselves. If nothing else they are a great addition to our petting zoo. 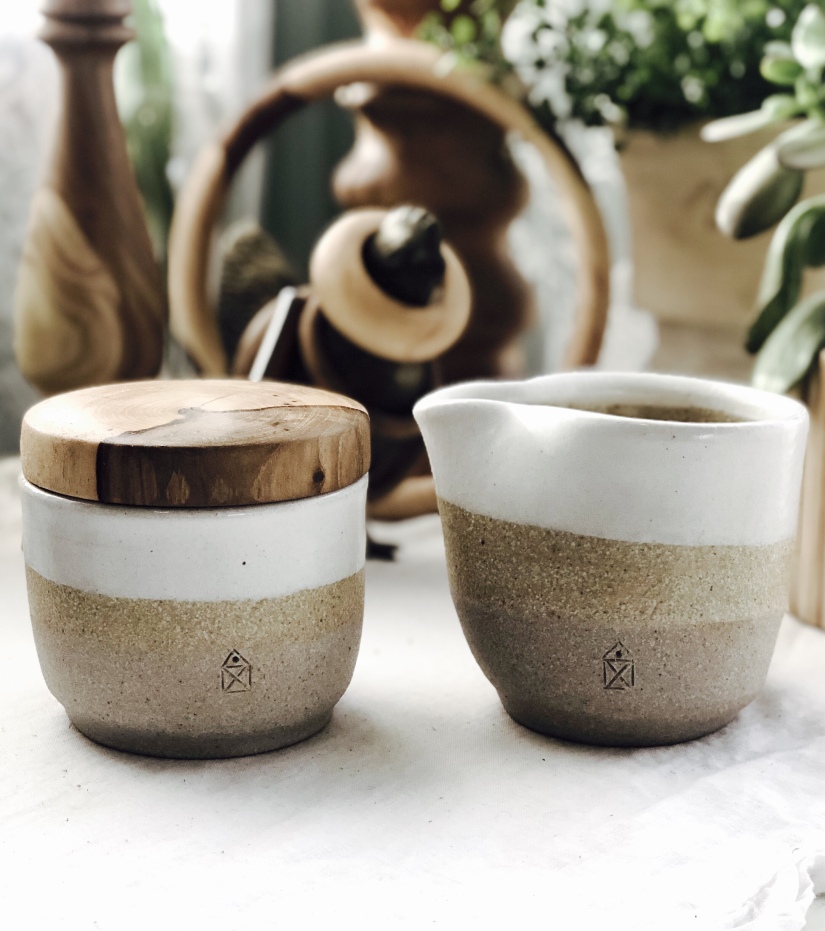 I posted this sugar and creamer on Social Media, so some of you will have seen it already. I’m working on making more of them to sell.

Also, I tried my hand at making a vase.

It’s different from my usual style, but one like it caught my eye online, so I had to try and make one ☺️

Did I ever post pictures of my tulip crates I made last month? I can’t remember if I did… so here you go…

I think my next blog post will be about making yogurt. I’ve made it twice this week and I LOVE IT!